The International Radio Creative and Production Summit wrapped up yesterday evening. Friends from across the globe are returning to their homes. But, Eric and I decided to spend one additional day in Los Angeles on this trip, in part because we saved enough on the airfare to more than justify the additional cost of one extra night in our hotel.

There are actually a few other Summit attendees who have decided to stay for another few days, including our friend Pam Tierney of Chicago. She had heard great things about Dodger Dogs and so after a lovely breakfast and conversation with the equally lovely and charming Kristine Oller, we took in a game this afternoon at Dodger Stadium. A friendly chap from the next seat over was nice enough to snap a photo of the 3 of us. 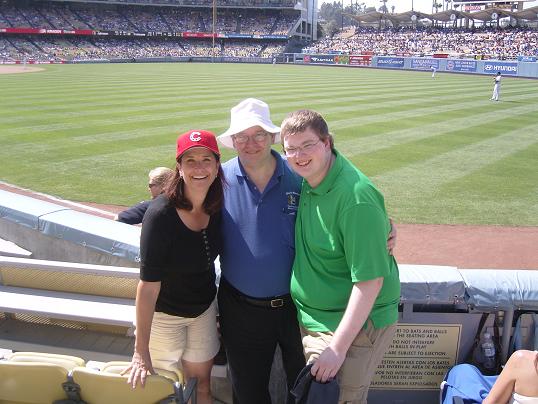 It was a beautiful day for a ball game (the Dodger Dogs were a definite hit) though I suspect the Dodgers’ fans might not feel quite so happy about it since the game didn’t go too well for them. Later I’ll have more photos from our next event on the schedule, a dinner with a number of voiceover folk from around LA, plus Pam Tierney, Melissa Exelberth, Eric, me and Marice Tobias. But, more about that later.