If we’re going to be successful voice actors we have several paths we can take, I suppose. Some concentrate on audiobooks. Others on promos. Trailers. Corporate narrations. Commercials. Some of us do lots of different things. Some just a few. But, for every one of us, having clients who come back again and again with work is a great blessing. If we have enough clients who hire us repeatedly, success is guaranteed.

So, Monday of this week was one of those days when I was faced with a few obstacles and here’s how we handled things. I had been away from my home studio for a few days and as I was driving home I received a call from my agent Doug at The Talent Group in Cleveland. A very frequent client, who had booked me for work the previous week, needed 2 lines of revisions. I explained that I was driving and that I should be home before 4:30 that afternoon. We set the phone patch session for the revisions for 4:30. We actually got to the house a little early, but that’s when it became clear there were a few obstacles to overcome.

Obstacle number one: while I was gone 2 feet of snow had fallen on my home. This, of course, included the driveway. When I got to the house, I couldn’t get the front wheels onto my driveway, much less the entire car.

Obstacle number two: I didn’t have a snow-blower anymore, having given it to one of my brothers when I thought I was moving to North Carolina permanently.

Obstacle number three: I didn’t even have a snow shovel anymore, at least not with me. It was back in the garage of the house in North Carolina buried behind a whole lot of other stuff.

Obstacle number four: my snow boots and winter coat were in the coat closet in the house, up the 75 foot driveway that was now buried in 2 feet of snow.

So, I called my agent back and asked if we could move the session to 4:45 PM. Then, I found a spot across the road that was cleared of snow enough that I could get my car off the road and then tramped through the snow in my dress shoes. (My son Eric had it worse. He was wearing shorts!) Fired up my workstation. Got the phone patch set. Caught my breath and did the session at 4:45. Delivered the audio just a few minutes after the brief session was done. Took care of a couple of other quick lines another client needed and then kicked the heat up for the house. Pulled on my snow boots and winter coat and headed back out through the snow to see if I could find a snow blower or at the very least a couple of snow shovels.

Thankfully, Eric was with me, so, even though all the snow blowers were gone we did find a couple of shovels and after a day and a half of shoveling we got the driveway cleared and the car into the garage. Neither of us missed any sessions and we got a great workout together.

Update: I realized this morning that I have a photo of the house that gives you some idea of what things looked like not long after we started shoveling. 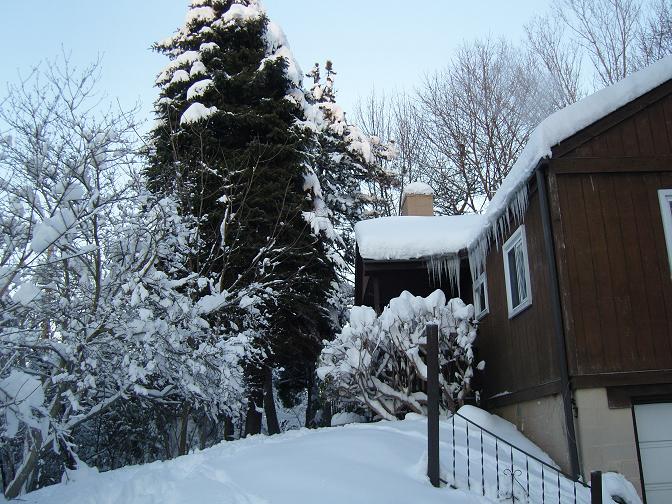 UPDATE: John Florian has re-published this article on VoiceOverXtra. Thank you, John.