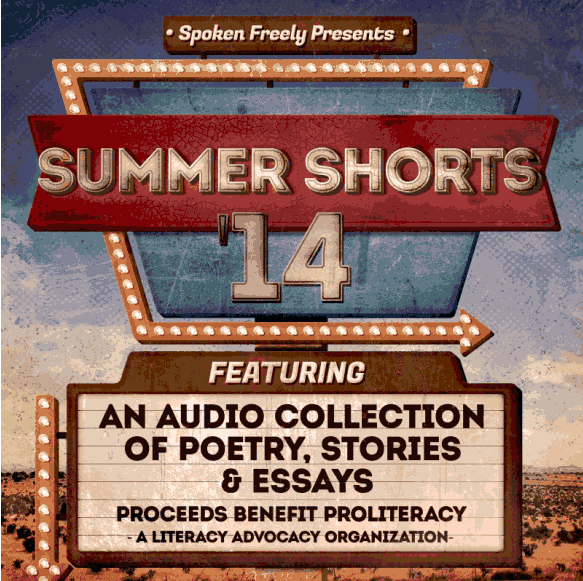 June is Audiobook Month and again this year I’m taking part in the Summer Shorts series of blog releases. Spoken Freely, a group of more than 40 professional narrators, has teamed with Going Public and Tantor Media to celebrate June is Audiobook Month (JIAM) by offering Summer Shorts ’14, an audio collection of poetry, short stories and essays. All proceeds from sales of the collection will go to ProLiteracy, a national literacy outreach and advocacy organization.

Throughout June 2014, 1-2 stories, poems and essays will be released online each day via Going Public, as well as on various author and book blogs. As a “Thank you!” to listeners, pieces will be available for free online listening on their day of release. As a bonus for those who purchase the full collection from Tantor Media in support of ProLiteracy, there are over 20 additional tracks only available via the compilation download.

With that background, today’s release is Hearing Aid, by Jeremy Robinson. Narrated by Jeffrey Kafer.

The story tells of a future world where one man regains his hearing after a lifetime of silence. But is he better off? Copyright is held by Jeremy Robinson. Recorded with permission.

Ever since his first play at thirteen (his mother still has the bellhop costume), Jeffrey Kafer has been an avid performer on the stage and in voice-overs. He has narrated over one hundred books spanning all genres and won the 2008 Voicey Award for Best New Voice.

The previous post in this series can be found at The Book Nympho.

The next post in this series will be at MV Freeman’s blog, tomorrow.

And if you’d like to scan through all of the posts in this series, check out the Going Public blog.